All our males are at stud to approved & health tested females only. 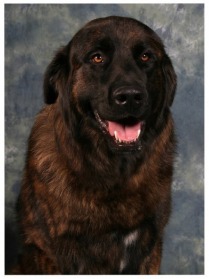 Quin unfortunately injured his back as a puppy by getting stuck in a gate!  After a good start to his show career, his back (after several knocks whilst playing) just became too painful.  He now has visits to the chiropractor and uses a Bioflow collar which is a huge help.

Quin has been used at stud a few times resulting in some wonderful puppies.  Including a top winning bitch (Clerafora Valhas) and her Best of Breed winning brother (Clerafora Valverde).  We are very proud of his other daughter, Pi (Clerafora Varziela) who is owned by Jayne Lewis.  Pi is the first British Estrela to have gained working titles, and currently has passed her CDX and UD levels.  This takes a lot of patience and hard work from Jayne, we are in awe of her!

Taran is one of our 'Portuguese' litter.  We took Menna to Portugal in March 2009 where we mated her to the gorgeous H'Argos in the Serra Da Estrela mountains.  The litter was outstanding!!  We kept a male and a female who have had a very successful show career so far.

Taran is the most dominant of our males, but being so close to his working background, it is not surprising he has good guarding instinct!

Taran has taken to the show ring like his mother did and has far exceeded all of our expectations.  So far his best achievement was winning Best of Breed at the World Show in Denmark 2010.  Aged just 13 months, he managed to beat at least 7 champions from 4 different countries to do it!  He loved the Group ring even with all its glitz, glamour and NOISE!!!

Taran is now living in Portugal with our friends Joao and Marta (Alpetratinia) at the base of the Serra da Estrela mountains!  He is doing fantastically, and loves the life he now has with many other Estrela's of all ages!!