The other dogs at Sturtmoor (past & present):

Lexi is fantastic for her age.  Now clipped off, many people ask how old she is and are shocked when we say '13 years'!  She is still full of life, and loves to play with and kiss everyone.  She had one litter with two beautiful puppies that gained very good results during their show careers.  Lexi herself did extremely well, but was often overshadowed by her half brother Smudge (Roseollie Spanish Dancer for Sturtmoor) who we sadly lost in 2008. 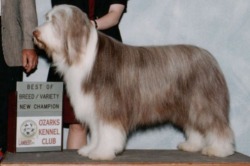 Xander was one of a litter of two.  As there were only two, Maggie stayed at home with Marcia and Xander was adored by Camille so went to live across the valley!  He then got to go to America when Camille and her partner moved to the USA for 5.5 years where he gained his American Championship and also his Novice Agility Jumpers (NAJ) title.  He came back to the UK with Millie, living back in the house he grew up in!  Xander had a very successful show career as a puppy here in the UK too. 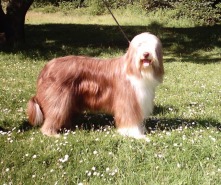 Maggie is Xander's sister, the only other sibling in that litter.  Maggie too had a fairly successful show career and she lived at Sturtmoor for several years.  Maggie was a very energetic dog, and with Marcia's health problems it was impossible to give her what she needed - LOADS OF EXERCISE!!  She eventually went to a new home that could provide just that.  Maggie had one litter of four pups, who also went to wonderful pet homes.  This was our last Beardie litter as we had started to concentrate more on the Estrela's once again. 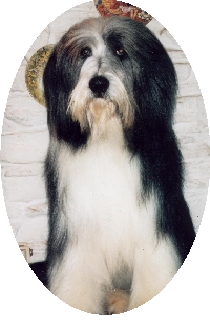 Smudge was half brother to Lexi.  He came to us as at 9 months as a lunatic, apparently the home that had returned him said he would 'never be controlled'.  He was the most wonderful dog anyone could hope to meet!!  Macia though she was crazy taking him on, but there was something in those big brown eyes that she trusted.

Smudge had a wondeful life and was adored by all that met him.  He was a larger dog, but still did extremely well at Open shows winning over 50 Best of Breeds along with multiple Group placings and a Reserve Best in Show.

Smudge was certainly a dog to remember, we will always miss him terribly. 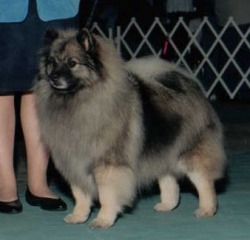 Marcia and Camille were sat in the bar at Crufts in early 1999 and Camille was talking about giving up showing as yet another of her dogs had 'gone wrong'.  At 9 months old it was crippled with Hip Displaysia, not only could she not show it, but she couldn't do agility or obedience either.  Jean Sharp-Bale was part of this conversation, and very kindly offered Camille the chance of one of her puppies.   That year, ironically, we were stewarding the Keeshonds at Crufts, and what a fabulous impression they made.

After following the breed at shows all year, and stewarding them when we could to learn more, PJ was finally born in October.  What a fantastic dog she was!!

PJ won several Best Puppy in Breed's and then a CC by the time she was 9 months old!  She finished the year as Top Puppy, and had added two Reserve CC's aswell.  Her greatest breed win was when we attended the huge K2000 event, with over 200 Keeshonds entered, PJ won Best Puppy In Show under judge Liz Cartledge at the Championship Show on the Saturday.  We were thrilled to say the least.

Unfotunately, PJ never made to Crufts in 2001 as due to Foot and Mouth they had moved the show from March to June.  We moved to Missouri, USA in the April!!

In the USA, PJ started off well, but when Camille and Brian returned to the UK for their wedding, they left PJ with friends who also bred Keeshonds.  WHen they returned 3 weeks later, PJ had settled in so well - she stayed there (just on the other side of town).  Unfortunately, PJ being the ganet she was and with the fact the people she lived with 'free' fed, she was now quite overweight.  Thankfully, due to ill health, they were unable to keep PJ any longer, so she returned to Camille who had since moved to Ohio.  She was immediately put on a strict diet, and a short time later won her first major!

PJ finished her American championship easily, and had a wonderful litter of 4 along the way.  Two of the pups were destined to fly back over the pond. Maisie (CH Sturtmoor Crazy for Neradmik) going to Jean Sharp-Bale who make her up to a British Champion.  AM/INT/IR CH. Sturtmoor Crackerjack (Fitz) went to Cecil and Rose Finn in Southern Ireland and was also co-owned by Liz Wogan.  Unfortunately, due to Cecil's ill health, he was not shown often, but did gain his Irish and International titles.  We were very sorry to hear of the passing of Cecil last year, and our thoughts are with Rose and their two boys Fitz and Fionn. 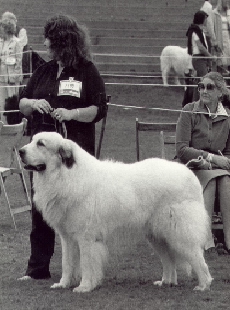 Huggi was the nephew of my beloved Tzar and Keema who came to us after the early loss of Keema.  Huggi was a gentleman following in Uncle Tzar's footsteps.  He had a very successful early show career until he met hot air balloons.  Unfortunately at that time many of our shows were held with agricultural shows and many of them featured hot air balloons.  So at any show Huggi was waiting for a balloon to appear from behind something. 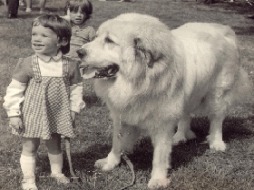 Tzar was a dog in a million and is still fondly remembered today by those who knew him.  He was a clown and a nightmare to show because of it and probably threw away more CCs than most dogs ever have the opportunity to win.  He loved everyone and everything and it was one of the luckiest days of Marcia's life when he became hers.  He is pictured above with Camille (aged 3 years).

STURTMOOR TAKE TO THE SKIES 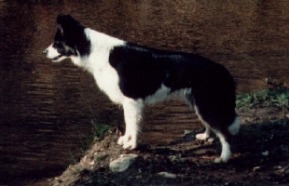 Bronwyn was from one of our 3 litters of Border collies.  She was a very dominant bitch who was full of working ability and proved it to us several times!  She was a striking show dog who won Best of Breeds as late as 9 years old.  Her last Best of Breed, we took her to the show for fun, during the challenge, the ring of Sealyhams behind us started to move around the ring.... Bronwyn whipped round to start working them (as sheep!!).  Once I finally got her attention back on the showing, the judge awarded her Best of Breed - Camille (who was handling her) was still laughing!! 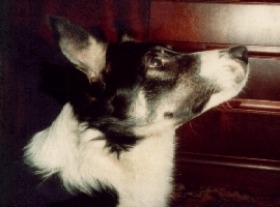 Breeze was a promise Marcia made to herself many years before.  Her father being a staunch Scot was always making fun of her for having dogs that weren't 'real' dogs!!  She promised herself a Border Collie, and during a family holiday trip to Ayr in Scotland, her then husband (Arthur Dovey) finally conceded and allowed her to go look for puppies!!  They found a litter on a farm which turned out to be very well bred working stock with some of the top working champions behind the pedigree!

Marcia brought home two, a dog and a bitch.  Breeze was called breeze as it was linked to 'Ayr', the dog was called Arran as it was during a day trip to the Isle of Arran that the decision was made to have them.  Arran later went on to work on a farm down in the South of England near to where the Sturtmoor Kennels were then based, but Breeze stayed with the family until she finally left us behind to go to a better place.  She was a much loved pet, and was shown during the very early days of the 'show' border collie - when people still didn't really understand the smooth haired variety.

Our love of Border Collies is still strong, but with limited space and concentrating on the Estrela's, we just can't have all the dogs we would love to have.