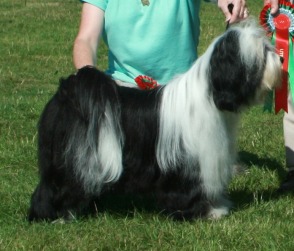 Phoenix is now neutered - so not longer available at Stud.

Phoenix came to me as a result of being lucky enough to look after and show some of Sheryl Rutlege's (ATISHA) Tibetan Terriers whilst living in the USA.

Phoenix is a joy to live with and is a proven sire.  He has had a shortened show career but a successful one.  He was an American Champion by the age of 10 months, and in the UK held his own in the UK despite the influence of politics.

In late 2007 he was clipped off, this was due to Camille's double transplant operation and not being able to cope with his tremendous coat as well as go back to work full time.  He was last clipped in October 2009 and his coat is  gradually getting to a decent length again.  He is enjoying showing far more now than he did previously, and is only attending the occasional Open show at present due to his lack of coat.

Phoenix is now the only TT owned by Sturtmoor, but the first TT came from Ken Sinclair (ARAKI) in 1993 (Araki Klever Klone).  Saran won 1 CC and 4 Reserve CC's before he was aged two.  On Ken's advice, he was clipped him off shortly after he won his first CC, and then whilst playing he managed to knock out one of his front teeth.  That was the end of his very successful show career!!

A couple of bitches followed, but neither were up to show standard and due to limited space were re-homed to live as adored family members.  It wasn't until Camille moved to the USA, where she was asked to handle someone else's Tibetan that they got under her skin again!

The first dog from Sheryl was Solo (AM CH Atisha's Exclusively Magic), he was made up to an American Champion by 10 months old but was not of a type to take back to the UK.  Before Solo arrived, Camille had two bitches from Sheryl to repair their coat and show to gain their championships.  These were AM CH Atisha's Blaze of Ballynagh (Dara) and also AM CH Mikudi Craklin Rose (Sugar).