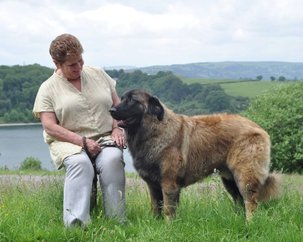 Sturtmoor was started by Marcia Dovey, back in 1974, after several years with Shelties and Pyreneans being the start of her showing career.  Estrela's are her passion, and have been for many years.  Marcia is the driving force behind Sturtmoor but is helped by her two daughters Amelia Kinsey and Camille Pentland.

With support from her family, even with poor health she carries on regardless, and loves every minute of it! 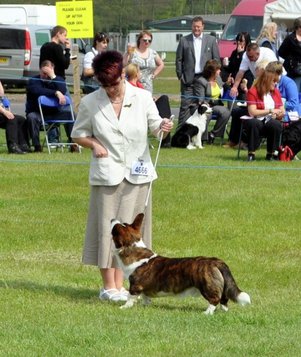 Marcia's eldest daughter, Amelia Kinsey, whilst slow to get 'into' the world of show dogs for herself, has always been there in the background.  Although not showing at the moment, her beloved Cardigan Corgi, lovlingly called 'stumpy' (real name Kasey - or Kerman's Call Me Patrick at Sturtmoor).remains at home with their old Smooth Collie boy.

Amy is married to Kevin Kinsey, and has two children (Keira and Kaivan).  They all come along to shows when they can, and help in any way they are able with the dogs.

After an injury to her knee (thanks to her Flatcoat Retriever several years go knocking it sideways!), she is not able to run as fast as she could - but is getting better slowly!  Amy is has recently qualified for her photography degree with Cardiff University, and is often seen at dog shows practising her photography skills.  She has already taken some stunning shots (including the one of her mum and Jaydee above!), and is definitely in demand by the dog fraternity! 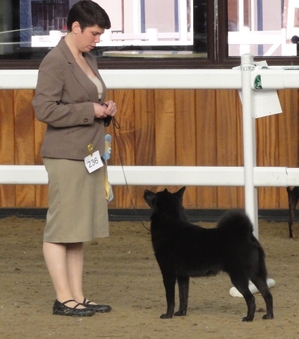 The youngest daughter is probably the most 'doggy' orientated of the two!.  She started handling (when allowed) at 3 years old, and has never looked back!  Going through school everything revolved around the dogs, and life has never changed.  Having owned various breeds along the way, she is now back to her original start of Norwegian Buhunds.

There is nothing she loves more than being in the ring showing beautiful dogs.  She has exhibited in several countries, with both her own dogs and other peoples.  Having lived in the USA for several years she learnt a great deal from professional handlers and had the pleasure of showing at the famous Westminster Kennel Club show before she left the country.

Millie awards CC's in Norwegian Buhunds, Keeshonds and is also approved for Estrela Mountain Dogs (although the breed does not yet have CC's).  She is very proud of her achievements with her Buhunds and now owns a Silken Windhound, which is a new venture for her.